"The Teacher Shortage in America:
Can it be Explained? Can it be Solved?"

Education from Kindergarten through Grade 12 is in crisis in the United States of America. At the center of the crisis looms a severe teacher shortage. To understand the severity of the crisis it is necessary to explore structural factors, strategic blunders, the socioeconomic environment – and the connection between them all. And listen to the thoughts of a teacher with degrees and awards for his research from six countries worldwide.

Dr. Otto will talk us through a case study that helps explain the complex nature of the teacher shortage crisis. We will uncover the interaction between strategy, structure, and environmental context through interpretation of official statements released by school districts, the Department of Education, and professional associations. Then we’ll learn about a potential model developed to help stakeholders engage in more constructive and effective ways towards the policymaking process. Possible conclusions are also presented – all with the aim of fostering dialogue and serving as catalysts for the creation of innovative solutions. 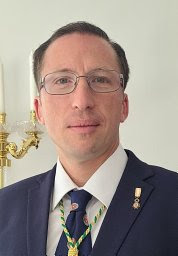 Professor Otto Federico von Feigenblatt, ALM '22, EdD, PhD, is an academician of honor of the Royal Academy of Doctors of Spain, corresponding academician of the Royal Academy of Economics and Financial Sciences of Spain, and of the Royal Spanish Academy of the Sea, and numbered academician of the National Academy of History and Geography of Mexico. He was knighted by King Phillip VI of Spain with the Royal Order of Isabella the Catholic for his contributions to the social sciences. Ambassador von Feigenblatt received the title of "Honorary Ambassador of the Republic of Kosovo" from the President of Kosovo for his contributions to the fields of development studies and peace studies. He holds a BSS in Asia Pacific Studies from Ritsumeikan Asia Pacific University (Beppu, Japan), an MA in International Development Studies from Chulalongkorn University (Bangkok, Thailand), a PhD in Conflict Analysis and Resolution and an EdD in Higher Education Leadership from Nova Southeastern University (Florida, USA), a Graduate Certificate in Social Justice and one in International Relations from Harvard University (Boston, USA). He is currently waiting to defend his dissertation for a Ph.D. in Social Science and Education from the Universidad de Huelva in Spain. His research is interdisciplinary, and he has received multiple honorary doctorates for his research and service. He is currently serving as Professor and Chair of the Graduate Education Department, Latin Division, of Keiser University (Florida, USA).